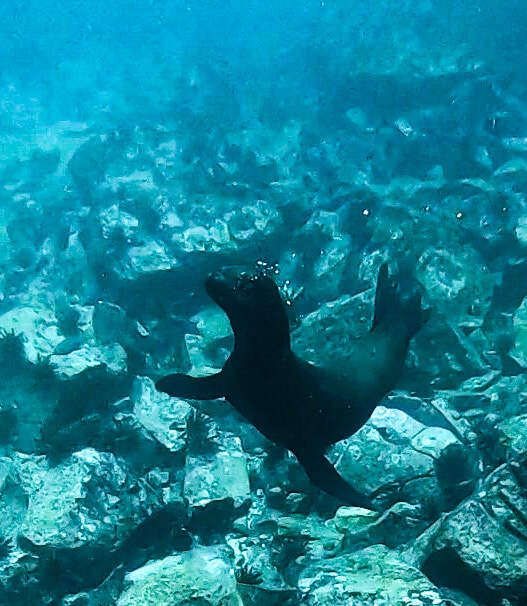 Since the Galapagos are volcanic islands it means that all the animals and plants somehow got themselves to the Galapagos. We learned that the tortoises had to float to the Galapagos. Because they are able to not eat or drink for around a year, they were able to populate and thrive on the islands. Charles Darwin studied these animals and this helped him in a major way to come up with the theory of evolution.

Before we came to  the Galapagos, on the passage from Panama we read the Galapagos chapter of the book Voyages of The Beagle. In this book you learn about what the Galapagos islands were like in the 1830’s. We read how Darwin observed animals, and questions and conclusions he came up with from these observations. His theory was about plants too. One example was that the taller trees of a species would have smaller leafs because they got more light at the top, while lower trees would have bigger leafs because the light was more shaded.

One aspect of the Galapagos is that all the plants and animals are fit to get the right amount of food and light to keep the food chain and balance going. When other animals and plants are introduced to the Galapagos, sometimes they are set for a different climate and they will take too much food or light. To follow up on that, blackberries rapidly grow and spread seeds. They will grow over a different plant and take all the resources. Some new birds also have bigger, superior beaks that are not needed for the Galapagos but allow the birds to get more food and the other birds can not compete with that. This is why it is important for the Galopigos to stay regulated and not let any species of plant or animal go extinct.

To bring us back to this special animal edition – you will find the top 5 animals from the Galapagos and how they live in their environment:

First…
To start us off with, not only my favorite Galapagos animal, but the best Galapagos animal – the Sea Lion. They are brown and slightly furry when dry, and more black and smooth when wet. They have big teeth, funny whiskers, and they are very cute. What I like about these guys is they give you a look like “what is going on with you?” When they are swimming with you, they are very curious. They seem interested by my air bubbles and goggles. They have a very funny waddle when they try to walk. The sea lions know that this is their island and humans are just living on it . You can find sea lions all over and they always look like they own the place. They will lie on benches and chairs or just in the middle of a walkway. Some of them seem aggressive and will bark at you so you should let them be and keep your distance. The females live the longest, but the males grow the biggest. You can find any sea lion posing and leaning its head under its neck. This is a comfy position for a sea lion, it is sort of like stretching. Sea lions also like to lie on boats so we had to make a blockade of a board and fenders. In one of the islands all the sea lions slept next to each other due to lack of space and when one would sneeze, before you knew it they were all climbing around barking at each other. They eat fish and like to play with the fish and get them into little balls then go and try to eat them.

Second: Next we have the adorable, fluffy little penguins. We didn’t see many penguins but the penguins we did see were very small. They looked around 2 or 3 feet tall. They had a little beak and looked like stuffed animals. They are really fast and when they are swimming they  look like they are flying. They eat fish and like to stand around the rocks. When you think of penguins you think of Antarctica but they are great in the Galapagos they just have less insolation and do not have to huddle up to conserve body heat.

In third place, there are the fellow tortoises. The tortoises look very strange. They have very long necks and they move their legs in weird ways. They almost look like aliens. We learned that Steven Speilberg came to the Galapagos and observed the tortoises before directing ET and ET looks a bit like a giant tortoise. We found that there are two different types of tortoises that look different and have different features which are the saddle back and dome shaped turtles. Saddleback have longer necks and longer front legs because they live in the lowlands where the little vegetation that is high up so that they can get to the vegetation. The dome shaped tortoises can’t reach their head as high because the vegetation in the high land where the dome shaped tortoise lives is much lower and easier to get to. There are also a few subspecies that have different DNA but the same features as other subspecies. There used to be more subspecies but now there are not as many because humans would take tortoises for meat because they could last around a year without food or water. Sailors would come from all over and take around 100,000 tortoises in total and they also brought rats from their ship that would eat tortoise eggs. These things caused some tortoise species to become extinct. All saddleback tortoises were close to extinction. However tortoise centers raised tortoises from eggs and released them back into the wild. These centers saved a species.

Fifth: Finally the funny looking Blue Footed Boobies. These are birds with a bright turquoise bill and feet. There are also red footed boobies who have a different color scheme. The fascinating thing about these birds is that they are not afraid of people. I got arms length from one that landed on the bow of the boat and he looked at me like I was just another red footed boobie. We read about this in Voyages Of The Beagle, it said that these birds had been here for a very long time with no natural predators. So they had know reason to be afraid. It also said that even if you hurt one it is genetically not going to learn to be afraid.