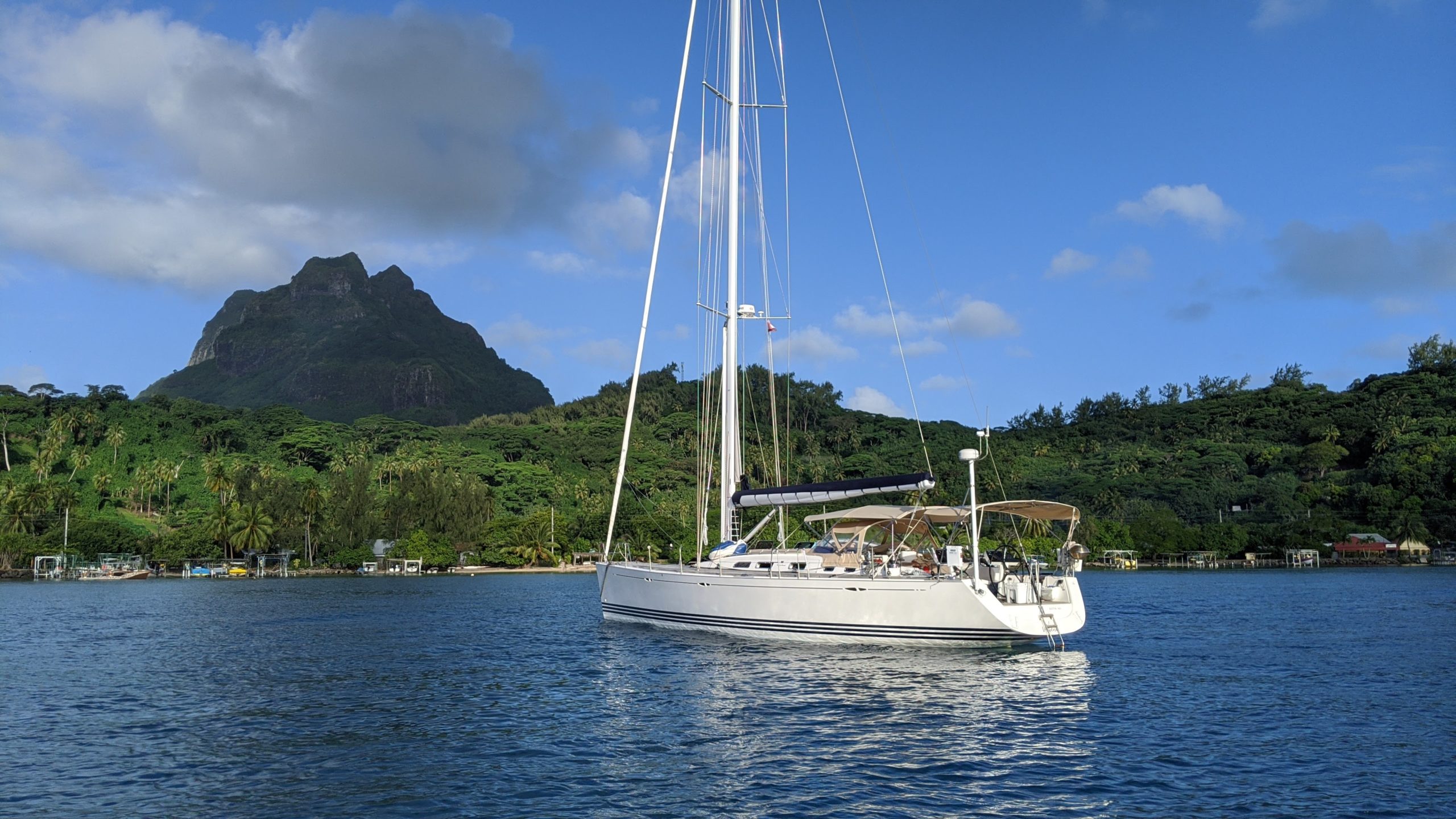 Following a pretty easy overnight sail we landed in Fare on Huahine, which is northwest of Tahiti.  Fare has a yacht club, a burger place with WiFi and a good grocery store, each of which was pretty exciting after being in the Tuamotus for almost a month.

It was 2 days before Ben’s 13th birthday and we did not have a plan for his birthday.  Shortly after getting into the anchorage, we got calls on the VHF from SY My Star and SV Flip Flops. We knew My Star would be in the anchorage but had not met Flip Flops in person. During lockdown in Nuku Hiva in the Marquesas, the kids started a kids radio net on the VHF since no one was able to socialize. Verbena and Flip Flops were regulars on the kids net where they told jokes, played games (like 20 questions etc.) and discussed school work (a little) but we never met them in person. Quickly, the kids arranged to go into land with other kids from My Star and Flip Flops. Another French boat, SV Stella Maris, with young teenagers was also in the harbor and joined the pack.

So we had the kids for a party. Now we needed a place and some activities. The beach in front of the hotel in the harbor was the best choice, and the hotel agreed to let us have our cake at their tables. We had a snorkeling scavenger hunt for water balloons that Bill and Vera had hidden underwater (some a little too well:), a blind folded SUP relay race, and some capture the flag. We had the cake with happy birthday sang in English, French and Tahitian – a memorable celebration!

Birthday festivities accomplished, we continued to explore the island with our friends. This included a hike along the northern end of the island to a marae, a historic ceremonial alter overlooking the sea. Joining us for the hike was the captain of the Arago, one of three French navy patrol vessels roaming the French Polynesian waters. The captain invited us to tour his ship and learn something about how a French naval ship operates.

Anchoring for us in Fare was an experience we won’t forget. Like many of the French Polynesian islands, you first head through a narrow pass in the reef surounding the island. Once through the water is calm making for safe and pleasant anchorage with minimal rolling due to ocean swell. The only problem is often inside the reef there is either very deep water or very shallow water right up against the reef or island. Further, the bottom is littered with ‘bommies’, which are coral outcroppings scattered all over the bottom. The trick is to find a patch of sand in the 12-40 foot depth with enough room for the anchor to swing without getting wrapped around a bommie or close enough to another boat. In many places this is near impossible.

Arriving in Fare we found a spot that looked OK and dropped our anchor. There were bommies around and it was on the edge of a deep drop-off but we felt it was the best we could do. We put on some anchor alarms to warn us of we strayed to far and decided to stay put. Of course in the middle of the night the boat started moving beyond what we thought was normal. Four about an hour we kept wondering is the wind and current just moving the boat or is our anchor dragging. Finally it became obvious that our anchor had dragged into the deep channel and was no longer on the bottom! We were just drifting around with boats, reefs and land in all directions. There was nothing else to do but in the dead of night, pick up the anchor, go back to the general spot where we were and try and reset the anchor. Another hour later we went back to sleep, this time waking up every hour or so to check on it.

In the morning we dove on the anchor and found that we were safe and secure, but now we were terribly wrapped around a bommie in about 25 feet of water. Bill free-dove on the anchor to try and free the chain but it just wasn’t possible. It seemed the chain somehow found a way inbetween and under two bommies but there was no clear way to get it out. The My Star crew came to the rescue with dive gear to try and free our anchor. After a good couple hours we ended up somewhat unwrapping the anchor from the bommie so we were only left with it being stuck in one place with no way to lift the chain out. We then detached the anchor from the chain and backed the boat up to pull the chain out of the bommie. We then reattached the anchor and were free. Never again will we anchor in that spot!

From Fare we headed to the south of Huahine, inside the reef to Avea Bay. Scott, the captain of My Star, suggested that this anchorage was a beautiful spot with a nice wide bay, good holding. It would b a perfect place to wait out the forecasted “Maramu” heavy winds. From this southern anchorage, we rode bikes around the Huahine Iti, the lower of the two islands a few times. We did an adult “dinghy drift” with Flip Flops and My Star (which involved drinking wine at sunset and watching the full moon rise while sitting in the unpowered dinghies).

After the winds died down a bit, we headed over to Raiatea the next island west. It was a short, but rolly sail dead down wind. Our friends on My Star also headed to Raiatea and Ben/Vera joined them to see how it was to sail aboard a 100+ footer. We ended up getting a mooring at the Moorings charter base for a couple of nights. We went to the “yacht club” there and we were the only ones there. It was eery to see all the unused charter boats lined up at the docks and at the moorings, as the borders were still closed during this time.

We motored over to the main port town in Raiatea, called Uturoa, to get fuel, provisions and propane. Then the kids from Flip Flops came aboard with us for the short sail up to Coral Gardens on Taha’a. Taha’a is north of Raiatea but within the same lagoon. We wanted to anchor by the reef, but again there were high winds predicted so we were able to get a mooring in the bay across from Coral Gardens.

In Coral Gardens, you could do a drift snorkel with the current between the motus. We snorkeled it several times, even if we got caught in the rain. We rode bikes, visited a local rum distillery and the kids did some SUPing.

Seeing it in the distance, we were soon ready to set sail for 30 nm daysail to Bora Bora – our western most point of our voyage. It was an especially unique time to be cruising these islands. The islands were COVID free but the borders remained closed so there were no tourists. No where was the lack of tourists more apparent than in Bora Bora, which was serendipitous for us. The first few days in Bora Bora were quite rainy. We visited the famous Bloody Mary’s restaurant and made a visit to the town for some provisions. The waters and mountain lived up to Bora Bora’s reputation of the ‘Pearl of the Pacific’ but the town left a lot to be desired.

After our friends on My Star arrived, we decided to live it up did a hike, a guided snorkeling tour with bbq and an ATV tour of the island. We had sailed about 10,000 miles to get here, so why not. The island views were so picturesque, they sometimes looked fake.

From Bora Bora, we had to head east (upwind) 145 miles back to Papeete for Verbena to catch her freighter to the US. We hopped back to Raiatea for a couple of days where we had a nice hike and send off dinner on My Star.

From Raiatea, we had a pretty rough 30 nm sail back to Fare, Huahine. The seas were high and it was windy but Verbena was able to sail close enough to the wind to make the passage in one long port tack. We went to the yacht club with Flip Flops and had our WiFi and burger fix. Then we set off pre-dawn to sail for Moorea for a few last lazy south pacific days. It was an easy trip to Moorea, started out as a motor, then a motor sail, then a nice sail. While in Moorea, a trip highlight was swimming with humpback whales! They were so massive and so close – we’ve never seen anything like it!

Back in Papeete, gearing up for Verbena shipping, we did some boat cleaning and packing. While still in the warm, clear blue water, the kids completed their dive certifications and are now certified divers. 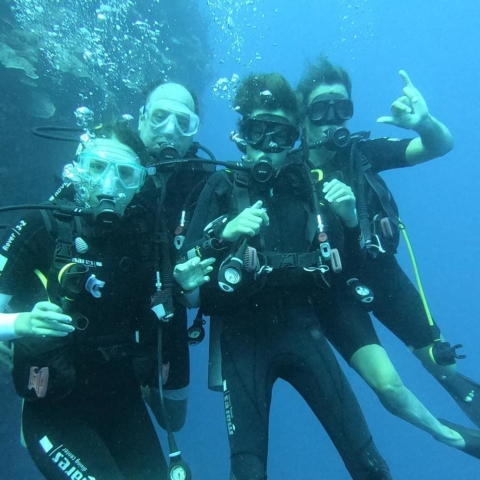 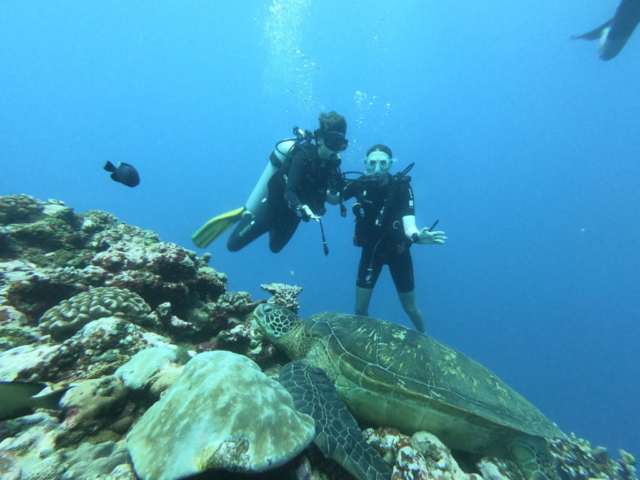 Once the boat was loaded just in time, we flew back to the USA later that evening. We arrived in French Polynesia on March 12th and left on August 11th, one day before our extended visas were set to expired. We will next meet Verbena in early September in Willmington, North Carolina and sail her back to our home New England waters.

One thought on “South Pacific Finale – Cruising the Society Islands”