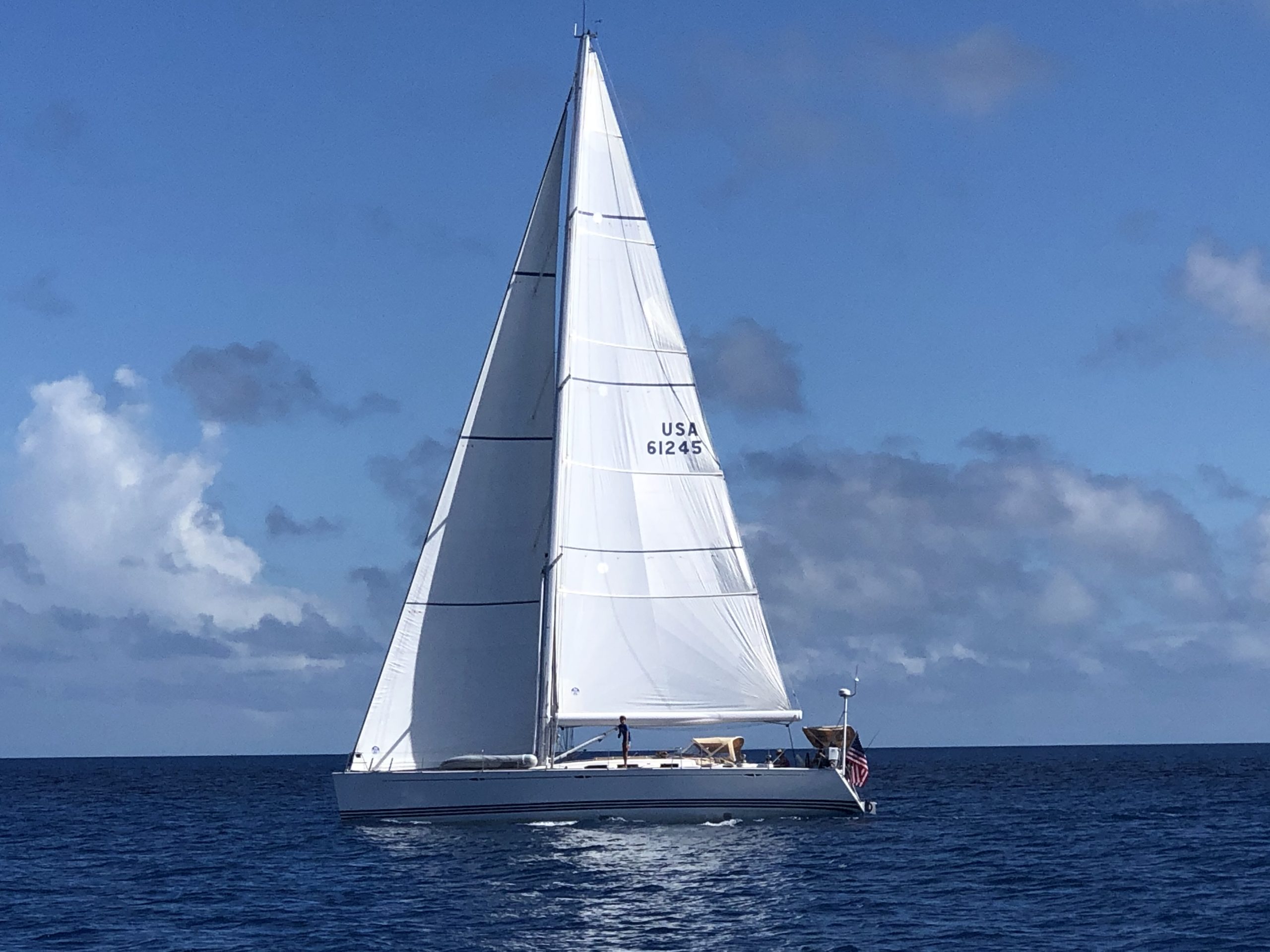 We have finally settled on what seems like a good plan to complete our Verbena live-aboard trip.  All international boarders on our route to Australia remain closed due to COVID-19 with no set opening date and our original 3 month French Polynesia visa has just expired.

We plan to stay in French Polynesia until the end of July, then ship the boat back to the US east coast. We will fly back, upwind, to the USA.  There is a transport ship coming to Papeete at the end of July or beginning of August.  This will take Verbena to Wilmington, North Carolina.  Once the boat gets there, we will sail it back to the Boston area.  We’ve applied for French Polynesia visa extensions until we fly out.  We’ve received a one month extension and are told that we should be allowed one more month if we apply again.

We’ve also put the boat up for sale – here’s the Yachtworld listing.  If a buyer wants the boat in the South Pacific or another location, we will of course alter our intended transport and sailing plans. We love the boat, but it is too big for us to maintain once we move back to our Boston based life.

Between now and our boat shipping date, we will continue to sail and enjoy the French Polynesia waters and islands.  We are currently in the Tuomotos.  Our plan is to spend a couple more weeks here then head to the leeward Society islands of Raiatea, Tahaa, Huahine and Bora-Bora.  After that, around mid to late July, we will head back to the the Moorea/Tahiti area.

How did we come to this plan?

The end of our trip was always an unknown.  Australia had been our destination because that is one of the typical ending points of a March to November South Pacific cruising season.  It is out of cyclone region and a good sailing base.  From Australia we would have options to care for the boat or sell it or ship it back to the US.  Reaching Australia one year after leaving Denmark has always been an aggressive sailing plan, one that forces us to generally keep on the move.  As much as we liked the idea of reaching Australia, we were always fine with changing the destination, after all the point of the trip was never about where it was going to end.

From our mid March arrival in the Marquesas through our April lockdown in Tahiti, it became more and more apparent that sailing to Australia by August was an unlikely possibility.  There are 4-6 countries we would pass through along the 3500 nm path from Tahiti to Australia.  All of these countries closed their borders and have made no impression they will open to cruising boats anytime soon.  If we can’t hop our way to Australia it is less of a desirable end destination – even if one day Australia decided to allow us to enter.

We also learned that to sell a boat in Australia you first have to import it into the country.    This meant paying a 15% tax on the boat before you have a buyer.  That, on top of a currently weak Australian to US dollar made the Australian market less desirable if we wanted to sell the boat.

Another path was to sail to Hawaii.  We have a few American boating friends we had met who took this route.  With a visa to be in French Polynesia only for a few months, it was unclear if or when we would be forced to leave.  Heading to Hawaii removed these issues.  But it was another 2500+ nm non-stop sail and then from there we would need to sail another 3000 nm to get the boat to the US west coast.  Our research showed that shipping options, boating services and even cruising in Hawaii are limited.  Given we weren’t looking for additional long passages, the Hawaii option wasn’t appealing to us.

We mainly considered Hawaii when we were in the Marquesas on the eastern edge of French Polynesia.  Starting in the Marquesas would have given us the most favorable sailing angles.  When the French Polynesian government required us to sail southwest to Tahiti from the Marquesas for the lockdown period, the sail to Hawaii became more challenging.  In addition, June marks the start of the eastern Pacific hurricane season which includes Hawaii islands.  By mid May, our Hawaii option was out of the question.

With nowhere to sail to by August our options came down to the following:  1.) leave the boat in Tahiti in August, 2.) ship the boat somewhere, or 3.) decide to continue our live-aboard sail and wait for something west to open.

Leaving the boat in Tahiti never seemed like a good option.  There are no facilities to take the boat out of the water in Tahiti due to its remoteness and relatively few services, compared to major markets like the US, New Zealand or Australia.  We would only want to leave the boat if we had to, and would need to include making arrangements to have people closely monitor the boat.

That left us with ship the boat or continue on sailing for another year. Reading the news and speaking with friends and family back in the US, it was an enticing idea to stay in COVID-free French Polynesia and the South Pacific.  We were coming back to Boston in August mainly so Vera and Ben could go back to school in September, yet it is unclear if physical schools will even be open next year.

We made friends with various families that are spending multiple years, part exploring and part based in various places around the world.  This way of life once seemed too extreme for us but seeing how others do it and living it for a year, these feelings softened.  One more year as the Verbena boat family sounded pretty good.

Our “one more year” plan would be to make our way to New Zealand by November.  November is the start of the cyclone season in the South Pacific so there are many boats counting on getting to New Zealand or Australia before cyclone season.  I believe getting to New Zealand by November will become possible one way or another, although our visa extensions here would be an issue.  We would then spend the US winter months in New Zealand living, cruising and exploring both land and sea.  The kids could maybe even do some land-based school options in New Zealand.  Come March or April 2021 we would see the world situation and make a new plan.

Our only other option was to ship the boat.  When we learned of a July/August transport ship from Papeete to the US east coast we decided to take this option.  This would enable us to spend a June and July sailing the vast French Polynesia waters without continuing to wonder about our next steps.  It would also bring the boat back to our home waters, making it easier to care for once we stop living on the boat.  Our research also showed that unless there is a buyer who wants the boat in the South Pacific, the likely best market for our type of fast cruiser is the US east coast or Europe.

Continuing on for another year will remain an ongoing ‘what if’ thought.  We have more exploring to do but we also feel the call of our previous life in Boston…kids’ high school, family, friends, work-life.  We felt it is good to end the current adventure wanting more and that is hopefully how things will wind down for us.