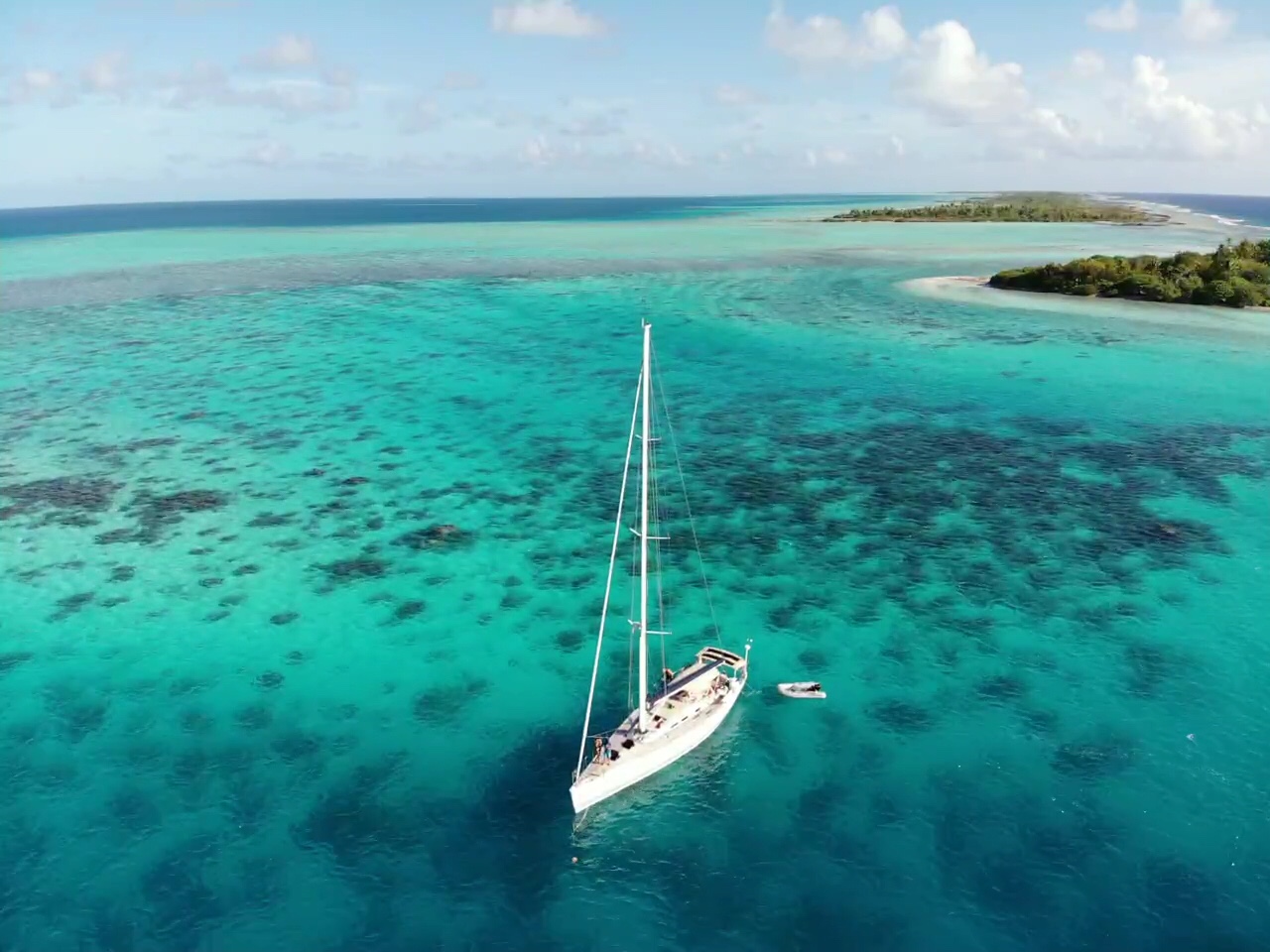 We sailed by the Tuamotus during lockdown, going from Nuku Hiva in the Marquesas to Tahiti, but were not allowed to stop anywhere during the quarantine. With lockdown over, we were eager to head back. After waiting for a reasonable weather window for the typically upwind sail, we left Papeete on June 3 for an overnight 250 nautical mile sail to Fakarava, an island in the Tuamotus archipelago. The Tuamotus are a remote archipelago of lowing lying reefs in the South Pacific. Inside each reef is a lagoon formed, as Darwin noted, when the volcanic island slowly sank down back into the sea and the reefs that formed around the outside of the volcanic island continued to grow.

Waiting for a break in the customary easterly trade winds, often means the weather is unsettled. Although the forecast was for light winds, our passage to the Tuamotus ended up being during a storm! We ended up seeing southerly wind up to 35 knots for a couple of hours with rain – very heavy at times. The rain was so heavy at one point, it seemed to actually flatten out the waves. The wind angle was a reach and it was a fast trip, but unpleasant. Both kids were seasick and we were wet and stressed.

The wind died down by night thankfully. Unsure of the pass into Fakarava, we wanted to arrive during good light hours, not late in the day. We decided to pull into the false pass at Toau, a motu about 30 miles north of Fakarava, around mid day the following day. We picked up a mooring and marveled at the water clarity. We went for a swim and snorkeled a bit, although there was quite a bit of current. The anchorage was flat, peaceful and picturesque. We felt the relaxed pace of the Tuamotus.

Bill and I took the dinghy to land to try and pay for the mooring here. We talked with the couple who owned them. Rather than money, the lady asked us to bring her some flour when we sailed back through Toau (which, because she lives on a deserted atoll, makes perfect sense).

We left the next morning for Fakarava. Winds were light so we mostly motored. The north pass in Fakarava is quite large and open. We proceeded through the channel and anchored off the main town of Rotoava. One of the first things we noticed was a mono-hull and a catamaran wrecked on the beach! It was the talk of the anchorage that the storm we had sailed through was much worse here than out at sea. Apparently, 50 knot winds came up quickly. Numerous anchors dragged several boats onto the lee shore. A few had damage and the two on the beach were lost. At least it was better to be at sea than at anchor in that storm. Thankfully, no one was injured.

Hearing what happened we decided that if a similar situation came up again – an ongoing threat in the exposed Tuamotus islands – the best plan would be to drop the anchor in the sea and motor around in deep water till the weather passes.

Bill and I dove the North Pass of Fakarava in the afternoon. It was intense! Because of the current, it was probably the most difficult dive I have done. Sometimes I held onto my mask because I thought that it would get blown off. I felt that if I lost track of the guide, I would be swept out to sea and may never be seen again. But it was also exhilarating. In the strong current, without even swimming you felt like a superhero flying over fields of beautiful coral. There were also lots of sharks but they mostly minded their own business. The guide had a plan and pick up boat for the drift dive, so you actually never swim against the current.

From Rotoava town, we sailed inside the lagoon down to the south pass. It was a little nerve wrecking with coral heads and rocks to watch for, but fairly well charted. Inside the atoll, we had such flat seas, a nice mellow breeze and great landscapes that Bill quickly became a fan of atoll sailing.

We did two more dives of the south pass of Fakarava. The second afternoon one had some current but not as much as the north pass. It did have more sharks than I have ever seen and the water clarity is incredible. Another amazing dive.

Bill opted to do a night dive in Fakarava to watch the sharks feeding, which I promptly passed on. Being underwater in the dark would be disorienting enough, but with sharks feeding, no thank you. Bill survived the night shark dive and reported that the shark behavior was very different at night. The same fish that the sharks swam around with all day, they start eating at night. One would think that would suggest not swimming with sharks at night, but Bill enjoyed the dive anyway.

From the South Pass, we spent a rainy day anchored off the beach half way up the island. The day we sailed up the island, it was sunny and nice so Vera and I decide to go for a snorkel when we arrived. Shortly after we started snorkeling near a beach, Vera started screaming. Apparently, she stuck her hand into a hole in the coral and something bit her! The bite was fairly deep and bleeding all over. As we were in shark country, she went from being upset about her finger to getting hysterical about the blood in the water and sharks! We were planning on swimming back to the boat, which was a ways away, but we were able to get to the nearby beach which got us out of the water at least. The beach was deserted. Even if it was not, it’s like you can just call an ambulance on a sparsely populated atoll in the middle of the Pacific. I was really hoping the cut would not be serious. We were able to yell loud enough for Ben and Bill on the boat to hear us and realize that we wanted something. They came and picked us up by dingy. After the finger was cleaned up, it was not too bad thankfully. She kept it wrapped and out of the water for a few days. Moral of this story – don’t stick your hand into holes while snorkeling;) People think it was either a crab or an eel that bit her.

We then stopped briefly in the Rotoava again on the way up to re-provision. Provisioning was a challenge in the Tuamotus. We got very low on any fresh produce or baked goods. Supplies there are limited, to say the least. After that, we headed back to Toau where we celebrated a friend’s birthday on My Star, the boat we had been sailing around with. Her husband arranged a feast with local lobster and crab on the island and invited us to join their family and crew. Such a nice meal in the middle of such remoteness. He brought the tequila and a good time was had by all! 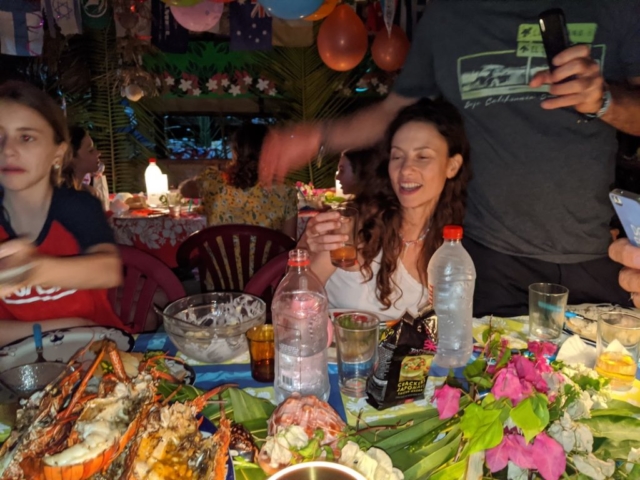 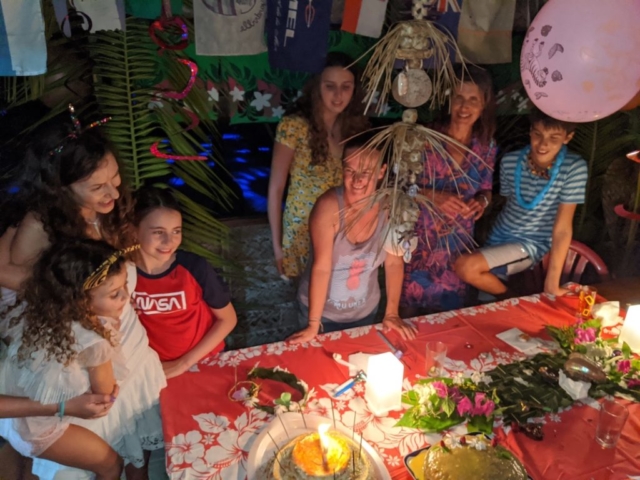 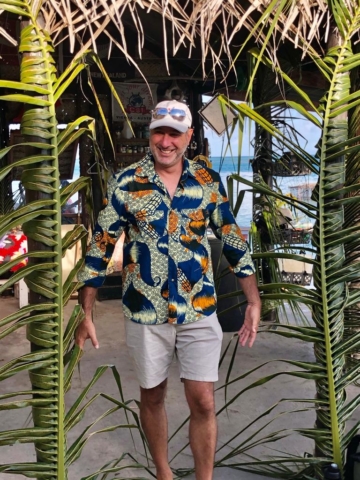 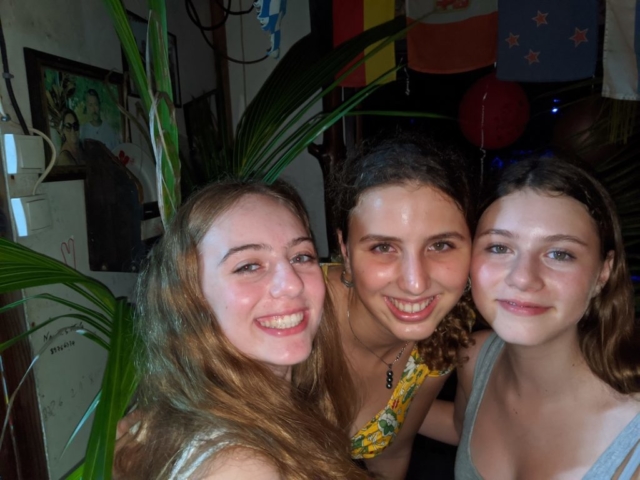 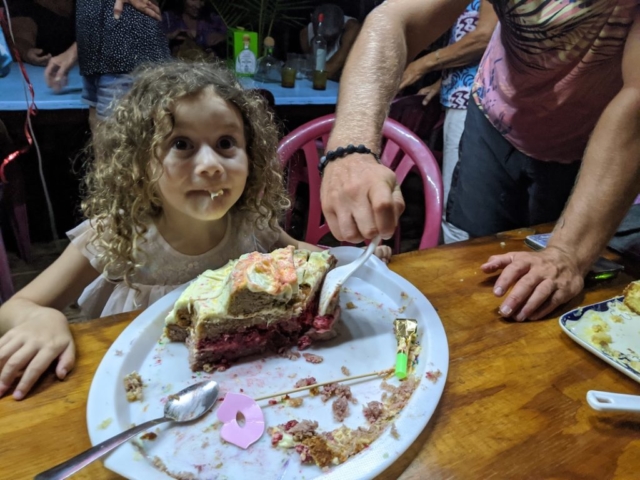 From Toau, we sailed north to Apataki. It was a rainy, squally sail. Clouds hung over the atoll as we approached and Apataki looked very foreboding as we approached. The pass was pretty straightforward. We stopped for the night near the town and headed to the southeast corner of the atoll in front of Apataki Boatyard to anchor. We had the kids on deck watching for coral heads as we crossed the lagoon. There are also pearl farms in the waters in the Tuamotus, another navigation hazard. We saw both, but we able to avoid them. We anchored in the clear waters off the beach, protected from the southeast where the strong winds were predicted from. On the beach here, the kids could literally pet nurse sharks that were close to the beach.

In Apataki, we had a bbq with the owners of the boatyard, their family and the boats in the harbor. They grilled the unicorn fish that we had been seeing snorkeling and people brought other items. Ben made cookie and brownies – which were a hit. A highlight of Apataki was the family and others playing instruments and singing around the fire late night. Bill plays a mean garbage bass and I was given a gourd bongo drum – with the locals on ukulele and vocals:)

We had a stay tucked into the corner of Apataki and waited out the Maramu winds that were coming through the Tuamotus. Maramu is the name given to the strong southeasterly winds that blow through in the Polynesian winter, mostly during July.  We had a few days of staying on the boat in strong Maramu wind and rain here. We were pretty well protected, but everywhere in the Tuamotus you sort of feel like you are in the middle of the Pacific Ocean hanging off a small reef so you feel a little exposed. There are some trees but no land elevation anywhere to offer wind protection.

Once the weather settled, we left Apataki late afternoon for a short overnight to Rangiroa. We sailed in light winds and then motored a bit to reach Rangiroa as the sun came up. We anchored, provisioned, snorkeled and had lunch in Rangiroa. We left early the next morning for a 250 mile sail to Huahine, back to the Society Islands. We would have liked to stay longer in Rangiroa – there was diving, a pearl farm and the Blue lagoon to visit – but we wanted to get to the Society Islands before the next Maramu came through.

9 thoughts on “The Tuamotus: Storms, Sharks and Soirées on the atolls.”