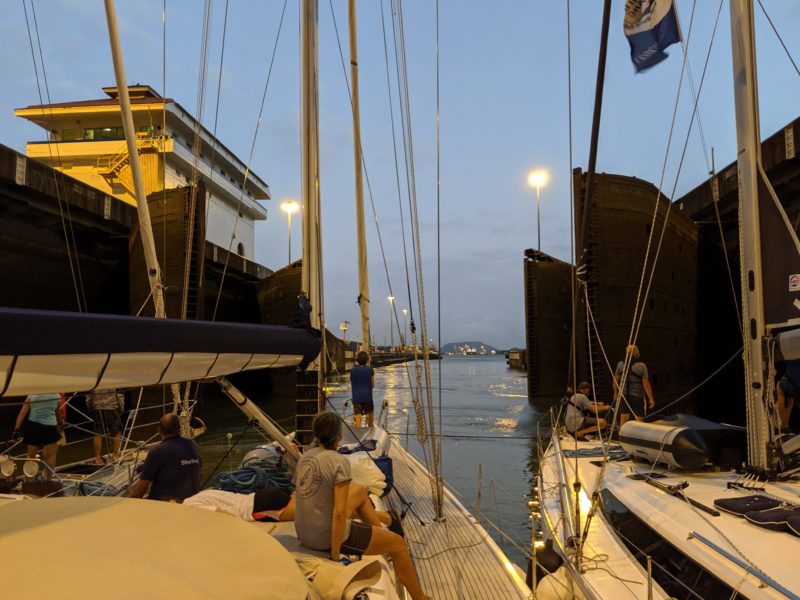 For our transit, or “Pans-it” (Panama transit) as we have come to call it, we started in Shelter Bay Marina which is just outside of locks. The Panama Canal is a big operation transporting over 180,000 boats since its opening in 1914. We then went into the harbor with two other boats, Mona, a German boat, and Starlight, a British boat. We joined the World ARC rally just for this leg of our trip through the canal so they could make sure all the logistics are all okay. All the ARC boats usually all go through the locks at the same time, 25 or so boats all together. However, because of the drought in the lake this year, they wanted to make each lock crossing as efficient as possible because the water bringing us up comes from the lake.

When we got to the harbor, a Panama Canal boat dropped off a Pilot to each of the boats. They would be on the boat with us while going through the locks to make sure everything goes smoothly. Our three boats were going to be right behind a big cargo ship squeezed into the back of the lock behind it.  The plan was we would all ‘nest’ meaning tie all three boats together, with ours in the middle because is the biggest. Then with these really thick blue lines would be given to the boats on the walls of the canal around 30 ft above our heads and they would lines ties off. Our three boats would be in the middle of the canal and the outside boats would be tightening their lines and the water rises and we went up. We started executing that plan and nested together successfully and started moving towards the Gate locks. However, when we got there there were only line handlers on one side of the canal! Not being sure what to do our pilots made a new plan with our boat against the side of the wall and the two other boats connected to us. Then just two sets of lines our bow and stern going up the wall. We didn’t really see another option so we did our best in the first lock with the weight of three boats on two lines while the water flowed in moving about 25 ft. In 5 mixtures. It was very difficult with so much sudden pressure on one line. If the lines were not pulled in fast enough then we would start to drift away from the wall but if they were pulled to tightly we would be pressed against the wall while still moving up causing our fenders connected to our lifelines not able to move up with us because of the pressure of the boat against them. The second time we did the best we could and Roger (our pilot)  was a big help as well but as the water went up our whole boat would lean with all the pressure towards the wall. We then had people from the other boats on ours side pushing away from the wall as we were going up.

Another problem was because we were up against the walls the angle of our lines was very vertical so the line popped off the side of cleat. When the line came off, it  ripped our man overboard safety gear off the stations as well as bruising the hand of someone helping us onboard. Finally we had risen the 84 feet up to the Gatun lake where we would be spending the night. This was not the Panama Canal transit that we had been expecting but we made the most of it. We also had our pilot and the Panama Canal transit arrange so we wouldn’t have that type of arrangement again with the locks on the other side. We tied up to a big buoy on the lake with others boats rafted to us. We had a quick hamburger on the grill and got some sleep for the night.

Once we exited the Gatun locks on the Atlantic side, we had entered Gatun Lake a man made lake extending across the Isthmus extending across 423 sq kilometers. The lake was formed by erecting the gate dam across the Chargres River. After the Chargres river is the Gillard cut where the bulk of the canal excavation took place in this 13.7 kilometer cut. Being very narrow it has the nickname of Culebra or snake for it winds around. The cut has been widened many times over the years to make way for bigger and bigger boats. We also learned that the three locks on the Atlantic side are all physically connected to each other with three chambers 110 ft wide and 1000 ft long, with all three locks together being 2 kilometers.

On the Pacific side, the three locks are separated.  The first one is called the Pedro Miguel locks which lowers vessels 29.5 ft to the Miraflores artificial lake. After crossing the lake, the ship is lowered the remaining distance to sea level by two locks. Due to the Pacific Ocean extreme tidal variations, the Miraflores locks are the canals tallest.

We also explored some of the history of the Panama Canal. Following the failure of a French construction team in the 1880’s, the United States commenced building a  canal across the 50 mile stretch of Panama isthmus in 1904. The project was aided by Ronald Ross who discovered that malaria was transmitted by mosquitos. They were able to take precautions against the mosquitos enough that yellow fever was eliminated, and malaria was greatly reduced. The chief engineer devised innovative techniques. He came up with a crucial redesign involving multiple locks from sea level to the lake. His successor, George Washington Goethals stepped up excavation efforts over a stubborn mountain range (now known as Culebra) and oversaw the building of the dams and the locks. Opened in 1914, oversight of the world-famous Panama Canal was transferred from the U.S. to Panama in 1999. The locks have never had any problems and have been fully operational 24/7 since their opening.

We awoke early on the lake, but there were some delays the next morning. The pilot arrived at our boat to take us across the canal and through the locks on the other side at eleven, instead of seven. We motored across the lake no problem and tied up at another buoy with other boats, waiting for our designated frater to arrive.

Around five or six in the evening we headed off with our two other boats in “nest” formation. The first lock went smoothly with us in the middle of two other sailboats. When we got to the next two locks, again there was only line handlers on on one side of the canal – much to my dad’s displeasure! He refused to be on the side again and offered to wait until morning to go. Another boat volunteered to be on the side however, so we went ahead. The second two  locks were much trickier than the first down lock because there was a ton of current in the water making it hard to steer. We also had to tie and untie our boats together each time. There was also a big tanker behind us closing in on us so we had to be speedy.  With a few minor but stressful mishaps, we got through the last lock and made it to the Pacific!

The Panama Canal is a historic shipping and engineering achievement but I was glad to put it behind us.