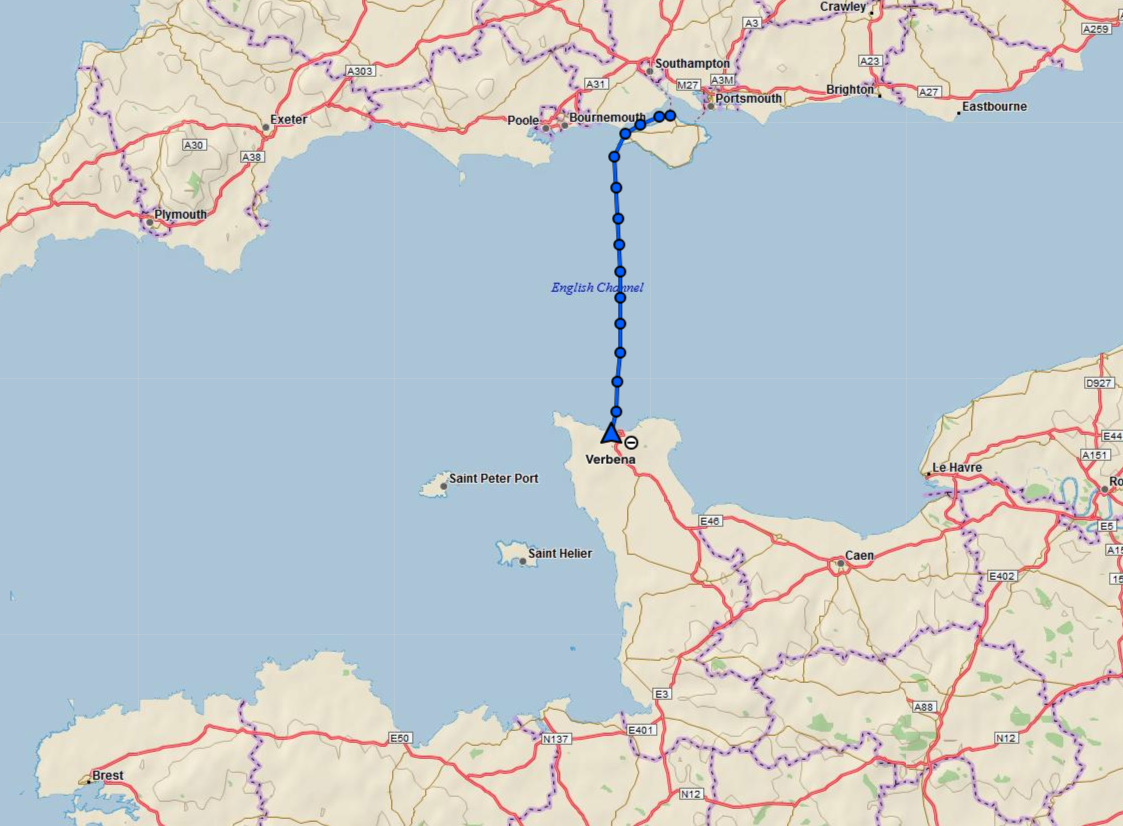 September 19, 2019 – Leaving Cowes we were torn. We were enjoying being around native English speakers and just getting enough boat maintenance and homework done to make time for some sightseeing. We needed another week in England to truely feel we experienced it. But daylight was getting shorter, the air had a new briskness and an ever present voice in my head was telling me to get across the Bay of Biscay as soon as possible.

We had a good weather window to cross the English Channel back to the Brittany coast. If we didn’t take it we all felt, without saying it, that we would likely not have the chance to head back to France. This meant missing sights people had told us about like Saint Malo and Mont Saint Michel. Leaving from Falmouth, England for Spain instead of crossing from northwest France would also likely add another 100 nm to our Bay of Biscay crossing, something none of us wanted.

We slipped away from the Cowes Yacht Haven dock in the hour before dawn. This gave us favorable currents from Cowes around the Isle of Wright. Currents — in places 3-5 kts — are a major factor in this part of the world. No wind, we motored for 2 hrs until clearing the Isle of Wright as the sun came up. Winds started at 10 kts out of the NE and we set the main and jib for a nice broad reach. It crossed my mind to set our spinnaker, but within 15 minutes the wind was up to 15-20 kts and Verbena was hopping along at 9 to 11 kts. No need for more sail. As the day went on the winds built to 20-25 out of the east and we progressively reefed the main then rolled up some jib. A 2-3 kt cross current made for bouncy seas and a very active, but fast sail. The X-55 is a powerful boat with a large sail plan. We once again saw that reefing when it starts to go above 15 kts did not slow us down.

Cherbourg is a marine fortress – there is not one, not two, but three progressive breakwalls. First is a massive one over a mile long protecting the harbor, then there is an inner breakwall protecting military and commercial shipping and finally there is the marina breakwall. Coming into port with about 25 kts of breeze around 5pm we were happy for all the protection.

Finding a marina berth is always an adventure in communication but Cherbourg marina was especially challenging. Renee must have called the marina 5 times to try and figure out where we should go. When we thought we had it correct, it still didn’t fully make sense to us. The spot they wanted us seemed way too small. I had flashbacks of trying to dock in Cuxhaven, Germany in another much to small spot; this was not an experience I wanted to relive.

Not in love with where we thought we were to dock and a desire to keep the option open for an early morning departure to Saint Malo (who were we kidding) we decided to get much needed fuel before docking. It was low tide so we watched our depth and inched towards the fuel dock in the 20+ kt breeze. With the wind pushing us on the dock landing was easy. There is about a 30 foot tide in Cherbourg and we were coming in at low tide. I don’t know why, but it felt pretty odd to be passing a fuel hose 30 feet down to the floating dock.

Paying for the fuel in the marina office we are told of yet a different (and much easier) place to dock. Glad we decided to get fuel! It wasn’t pretty and took some heavy bow-thrusting but we got off the fuel dock without incident and docked the boat at an easy wide open dock. The wind was pushing us onto the dock so hard we couldn’t even push the boat away far enough to set the fenders. Again we enlist the bow thruster’s help in moving the boat away from the dock just enough to squeeze some fenders in their proper place after our lines were set.

It was good to be tied for the night, enjoying Cherbourg and having the English Channel behind us.