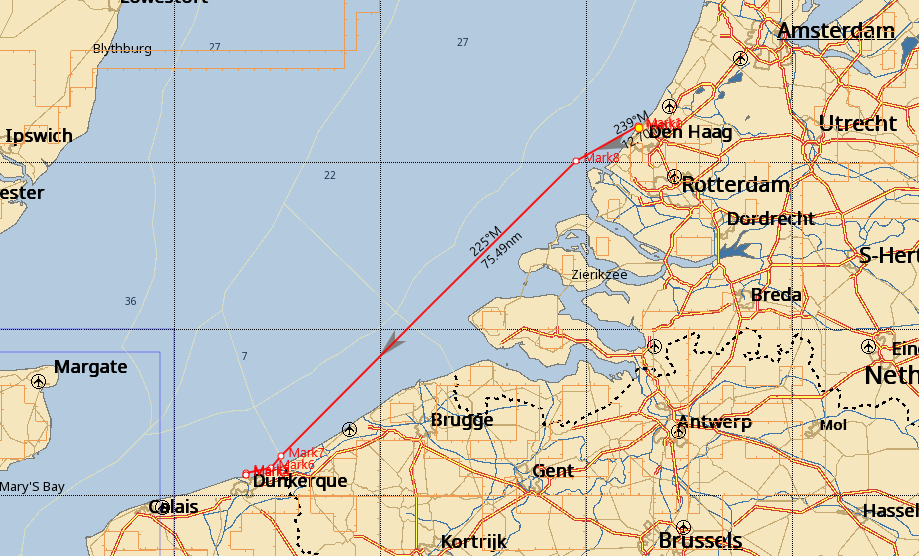 We left Scheveningen in the Netherlands prior to dawn for the sail to Dunkerque, France. We started out motoring with the current, then began sailing on a nice reach in about 15 knots of wind as the sun came up. There was some chop in the seas and the wind went behind us. We tried our new reaching asymmetric spinnaker, the A3. Bill determined it was the wrong sail, too flat for the 140 true wind angle. Later, we tried the gennaker, which was a much better sail for the conditions. But the windspeed went down to below 10 knots and was too light if we wanted to make Dunkirk by nightfall – we had enough of getting into new marinas in the dark. We motor-sailed for a while and we tried the gennaker again when the wind built, but in hoist the sheet extension spectra line broke. We could have just tied a bowline, but we wanted to inspect the full line and decided to take it down. We did the rest of the trip alternating between motorsailing and sailing with main and jib.

The entrance to Dunkerque is through a west or a east channel as it is surrounded by shallows. One section was questionably shallow on our chart, so we went sails down and slow – added drama but it was fine. The arrival in the evening to the marina was fairly straightforward.

Dunkerque sits on the French side of the Straits of Dover across the English Channel. It is a very tidal region. We explored the WWII museum documenting Operation Dynamo in 1940. Pretty amazing story of hundreds of thousands of British and French troops being surrounded and evacuating from the beaches of Dunkerque. Several of the stories included loading the soldiers on one boat for departure, then the boat being sunk by German subs or aircraft, then the soldiers being loaded onto another boat, which was also attacked.

The part of the story that really struck us was that the British asked private recreational boaters to go to Dunkirk and help evacuate soldiers in the midst of what must have been total chaos. The drafting of civilian ships shows the desperation of the time. Many hundreds of private boats participated. We envisioned Verbena being called to action to rescue soldiers. Ben thought we would go but would have a hard time getting across the shallows with our 3 meter draft, which is a good point. I also think our sails would be a pretty large target for enemy aircraft. But nonetheless we felt the “spirit of Dunkirk” and would give it a go!

The beach is now a board walk and has many restaurants. Because it is so tidal, mussels (“moules and frites”) were the dish of Dunkerque, which Bill and I enjoyed on the beach.