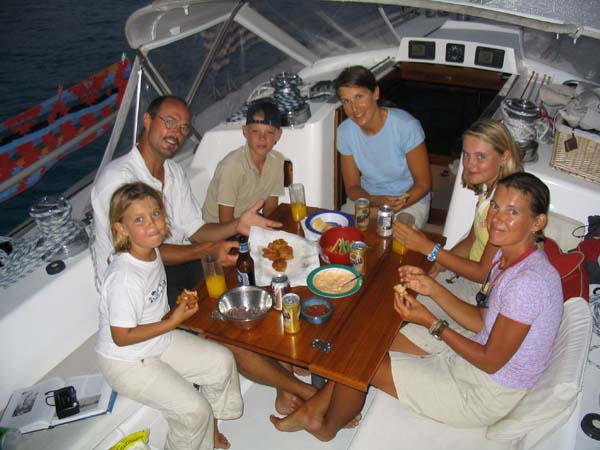 When Bill and I lived on our sailboat “Vanish” 15 years ago, we met a Dutch family on the s/v “Olive” from the Netherlands in the Bahamas. Picture above is from 2004 in the Bahamas. We even sailed with the kids, Eloise 13, Lukas 10 and Marijne 8 and the time, on Vanish between islands. (Link) Elouise later stayed with us in Boston one summer when Vera was about 18 months old. Aside from some holiday cards, we have not caught up with them in over a decade.

Prior to sailing Verbena into the Netherlands, we sent them an email to see if they were available while we were in the area. And they were! Judith and Lukas and girlfriend Naomi came to see us in Amsterdam. Then a few days later Lex and Elouise and boyfriend Earnst came to see us in Scheveningen (near The Hague).

It was reassuring for Vera and Ben to hear from Eloise and Lukas that missing a year of school was not catastrophic to their pre-teen/teenage years. Lukas told Ben that he certainly did not feel that missed anything by being away for a year – he said when he returned, his friends were doing the same thing they were when he left.

Thanks for the great dinners, inspiration and chance to catch up! The sailing friends you meet in different places are reason alone for doing the trip. Hopefully, one of you can join us on a passage!