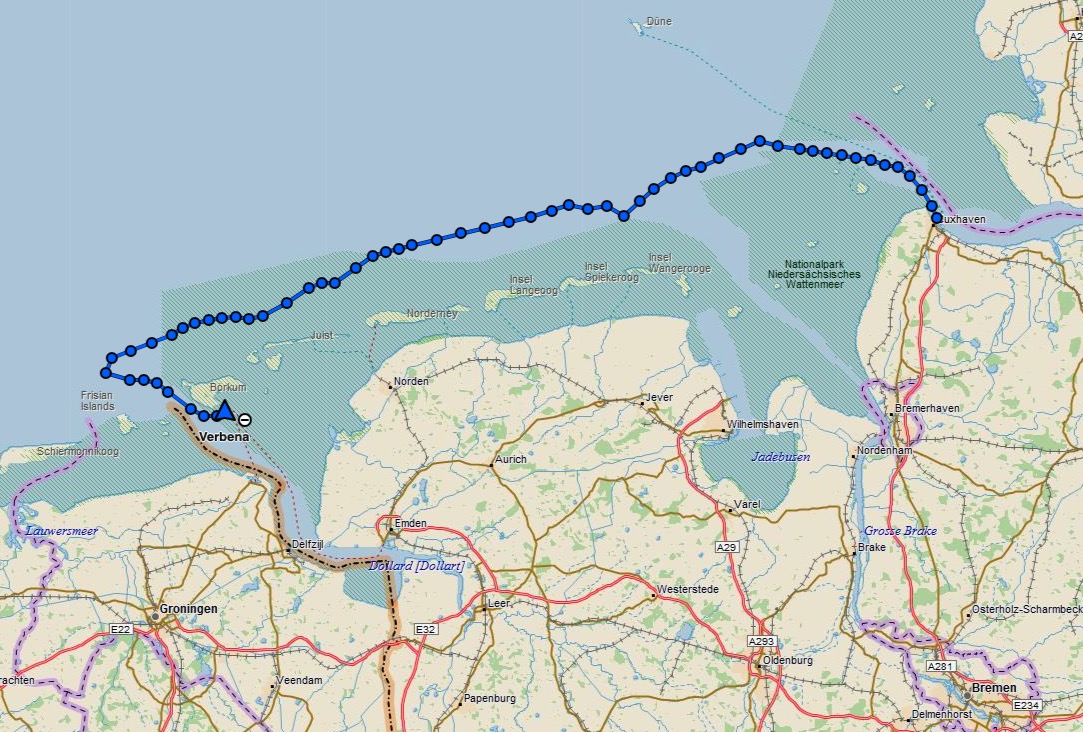 We left Cuxhaven, Germany at 7 am on Sept. 2 to try to get a favorable tide. Our initial route is an overnight passage to Amsterdam, with an option to divert to the Frisian island, Borkum, off the north coast of Germany at end of day. The forecast was for an upwind sail but was stronger and more on the nose than we thought. It was also expected to build in the night.

Initially coming out of Cuxhaven, the seas and wind were not strong. The current from the Elbe River was quite strong and favorable. There was a lot of commercial freighter traffic entering and exiting the Elbe. The wind and seas quickly picked up however.

A squall went through that caused part of our staysail to come unrolled. The wind went up to close to 30 knots. The sheets that were holding it together slid down the sail, let it unroll, and became a tangled mess. Thankfully, it did not come all the way unrolled. Once the squall subsided, Bill went on deck to try to get the sail properly stowed. He had to unravel the sheets and put the sail out. When we tried to re-roll it on the furler, we could not get it to roll up. Meanwhile, I was driving across the traffic separation zones for the freighters, and Bill could not get the sail rolled up or maneuverable. Freighters were heading our way! Bill went on deck and was able to change the furling line angle for the staysail manually and we got the thing rolled up, and quickly got out of the freighter lane.

Shortly after that, the kids came up on deck. Ben said he was not feeling well and began throwing up. Mostly it was over the side. I cleaned him up and had him sit on deck – with his offshore life jacket on.

The seas were sloppy; it was cold, wet, and very bumpy. During a squall, the rain would come down with great force. Sometimes a wave would come over the bow and get caught by the wind and hit the dodger with such force that some water would come through the zippers in the dodger – like a wave bullet. We buried the bow in waves multiple times. After one of the bow burying waves, I notice water coming through the foreword hatch. The dinghy was lashed down over the hatch, so rain could not come in. But the waves over the bow managed to push open the hatch and let the salt water in. I sadly looked at our wet berth and fully closed the latch on the hatch.

I felt like I’d been sailing for days and it was not even noon.

I had decided by this point that we were not continuing overnight to Amsterdam, but waited for the rest of the family to come to that realization. We continued motorsailing most of the way, either with a double reefed or single reefed main. Some sailing was double reef main and jib on a beat. The current had turned against us and the wind was 20 to 25 knots on the nose with building waves. Progress was very slow.

The last few hours seemed to never end. It was getting dark by the time we approached Borkum. We had to go through about 10 miles of a channel in the dark to get to the island, but compared to staying out at sea, it sounded great. At the buoy to turn into the channel to Borkum, there were many fishing boats that we had to dodge. The main channel to the island was well lit. We had to turn into a smaller channel to get to the marina which was quite nerve wracking. Not all the buoys were lit. There was no moon and we could not see. We came pretty close to an unlit buoy, when Vera yelled “turn to starboard” from the bow!

Once in the marina, there was room to maneuver and we were found the 20 meter French catamaran we were told to tie up to. They even came out and grabbed our lines. 11 pm – so relieved to be in port!

When we checked in with the Harbormaster the next morning, I was telling him of our woes – the long sail with the wind, waves, cold, and squalls. He responded with a smile, “Welcome to the North Sea life!”

One thought on “Cuxhaven to Borkum, Germany – “Welcome to the North Sea Life!””