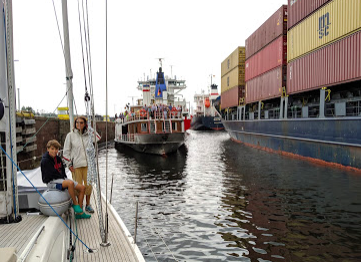 On Saturday, Sept 1 we transited the 60 nm Kiel Canal giving us a big shortcut between the Baltic and the North Sea.  There is no sailing in the canal and speeds for large tankers and smaller ships alike is limited to 8 kts, making it about an 8 hr trip to transit the full canal.

The Kiel Canal was the first connection between the North Sea and Baltic Sea. The canal was built between 1887 and 1895 and initially served German military needs by eliminating the need for ships to go around Denmark’s northern peninsula. The canal has been enlarged twice since then and today is about 160 meters wide and 11 meters deep. Prior to WWI, it was owned by the German government. After the Treaty of Versailles, it was internationalized. Today the canal still remains an important landmark for Baltic shipping and sea travel.

We left the Laboe marina around 8am and headed to the entrance of the canal which was about a half an hour away.  As we approach there is a steady stream of tankers coming and going plus lights signaling the state of the locks.  The main sequence is:  Red, closed; green, open for tankers, red and white, prepare to enter;  white, enter.  When we approached the lights were red.  We knew we had to pay the canal fee but were unclear how long we had before it opened or where to go to pay.

We pulled up to a quay and Renee and Vera quickly headed off to find the place to pay.  As they did the lights turned red/white giving the prepare to enter signal.  Like many marine situations we next did a quick scurry once Vera/Renee were back to get off the dock and head to the entrance area only to end up circling and waiting for another 45 minutes.  During this time tankers were entering the lock first and smaller boats were circling around.

After leaving the locks, we entered the canal and made the 8 hr passage southwest to the North Sea side.  Along the way it was easy to marvel at the engineering of the canal.  It must have been a huge amount of dirt to move to create a 60 mile long hole 30+ feet deep by close to 500 feet wide.  The canal passed through various towns and had many small car and people ferries along the way.  Most of the scenery is rolling farmland with people biking, walking and fishing along the banks.

Along the way there are regular signal lights.  For small boats like us, if the three vertical lights show red, then we have to stop.  Other signals are for the larger boats to stop or go.  From what I gather, much of the canal is too narrow for huge tankers to safely pass each other.  So the lights signal boats to wait in designated wider areas where it is safe to have two way traffic.

The North Sea end locks were a little different.  As we approached, we again saw red lights.  We slowly motored up and started circling around.  What we didn’t realize is there are two separate locks being operated on this side of the canal.  One set is for large commercial traffic and another set is for small pleasure craft like us.  When we finally realized that we had to head to the south side, the light there was white and boats were already entered.  We went full throttle and barely made it, as soon as we entered, the lock doors started closing behind us.

The North Sea side is a completely different scene from the Baltic end.  The canal ends about 15 nautical miles up the Elbe river.  The Elbe is a major European river that flows through German and further into Europe.  Much of Europe’s goods that arrive by ship come up the Elbe to the port of Hamburg.  In fact, the container we shipped from Boston to Denmark made it to Haderslev, Denmark by way of a New York to Hamburg ship.

There are many forces at play at the exit of the Canal all creating some challenging sailing conditions.  There is the flow of the river, the seas built up from the prevailing strong westerly North Sea breeze and a major shipping channel.  The result is smaller boats need to make sure to exit and continue on only if it is a high tide at Brunsbuttel.  This gives favorable current (as high as 5 kts) for the 15 nm to the marina at Cuxhaven or to keep going.

At around 8:00 pm we approached the Cuxhaven marina.  The approach was another of those harrowing moments.  You need to time your shipping channel crossing between tankers and consider the current as you line up to enter the marina.  Once in the marina, there are signs for different size boats and 5 meters of depth (plenty for our 3 meter draft).  There was no room in the 15-25 meter section alongside the dock so we rafted up with another boat which is the custom in this part of the world.

After a long day, we were in search of something to eat.  Renee found some places still open till about 10pm so we hurried off.  One place looked good but as we’ve found is often the case, the kitchen closed by 9:30.  We did end up at a nice Italian place where they were still serving pizza and salad.