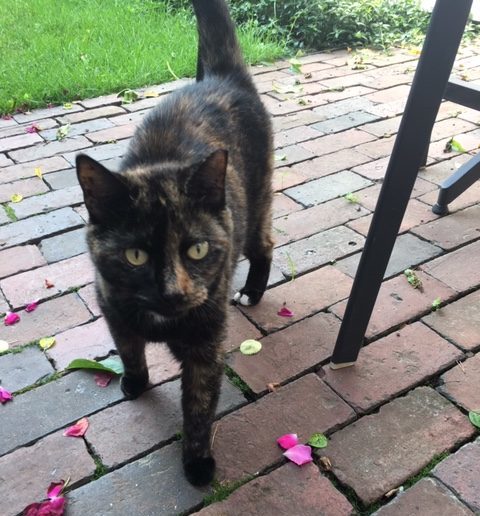 Many people have asked about our cat Freckles. Besides cleaning out the closets in the house before we left, I was also tasked with determining what to do with Freckles while we are sailing.

As far as back story, we unwittingly adopted Freckles when we moved to Charlestown about 6 years ago. She was a kitten born under our shed in the back yard before we moved in. She and her brother Tiger were friendly but wary kittens. When we were feeding them in the yard, we soon developed a whole group of neighborhood cats and it was too much.

We eventually called Charles River Alley cats about the situation. They take stray cats, spay or neuter them, give them shots, and find them homes or return them to their location if they appear too wild for adoption. Tiger went to live with an artist in Cambridge, but they returned Freckles to us. They said that she did not adapt well enough, and that she had to be willing to go to people other than just us in order to be put up for adoption.

We got her an insulated cat house in the back yard, and she would come inside to eat her food a couple of times a day. Gradually, she discovered that inside is not so bad, especially in winter.  So, we got her a litter box in the basement. She would mostly stay in the basement and did not go on the furniture or in the bedrooms. She comes up in the kitchen when we are cooking, will sit on lap and watch TV if you want her to and sits and looks at the door when she wants out – great pet.

But she had never been on the boat with us – or anywhere else really. Everyone in the family kind of wanted to take Freckles with us though. First concern was allergies. Bill and Vera seem to have a cat allergy, which they have been ok with as long as Freckles is not in their bedroom and they wash their hands after petting or holding her. With the boat being exponentially smaller than our house, not sure how that would go. Freckles would not have her own basement space like she does in our house. Bill and Vera offered that they would take Zyrtec every day if Freckles could come but I think we all knew this was not a good plan.

Second concern was how would Freckles deal with being on a boat. She was not known for her quick adaptability. Would she freak out and jump overboard? We took her on a test sail in Boston harbor on our friend Dave Alexander’s boat. She looked like she might have a heart attack and was afraid to come out of the carrier, but at least she did not jump overboard.

Third issue was clearing customs with an animal, since we plan to be visiting a lot of different countries. We had heard from some cruisers that cats were great because unlike dogs they do not need to come to land – they can just stay on the boat – and do not need to clear customs necessarily. Emailing with a long time cruiser with a cat, that did not seem to always be the case. Customs officials can come aboard the boat and required you to declare the pet. She said different countries have different requirements for letting them into the country. Apparently it’s almost impossible to get a cat into Fiji or Australia.  The cruiser with a cat person I spoke with ended up having their cat quarantined for 17 days and spending thousands of dollars to get her back. That was the third strike against bringing Freckles.

Resigned to leaving her behind for the year, I began trying to find her a home. Best option was if our house renters wanted a cat. Sadly, they declined due to allergies. After a bit of searching – most of the people who really wanted a cat did not like the giving her back after a year part – and after the going away party invite went out, our sailing friend Bryan Lee agreed to take her.  Bryan and Anna have many pets and previously a cat.  They think they want one again so cat-sitting Freckles for us was a good way to test the waters.

Bryan lives in Marblehead with his wife Anna and dog Loki. Bill thought that Freckles may be terrified of Loki, so Bryan graciously brought Loki to our house to visit. Loki was extremely well behaved, and Freckles was leery but did not freak out or run away.

The weekend before we left we packed up Freckles and took her to Marblehead. Bryan has a great house and yard. Freckles will hang out in one area until she gets used to the house and Bryan, Anna and Loki. Thanks Bryan! We will miss her and hope she is happy!

And Freckles, you are more out in the country now, just enjoy Bryan and Anna’s house and stay away from any coyotes!