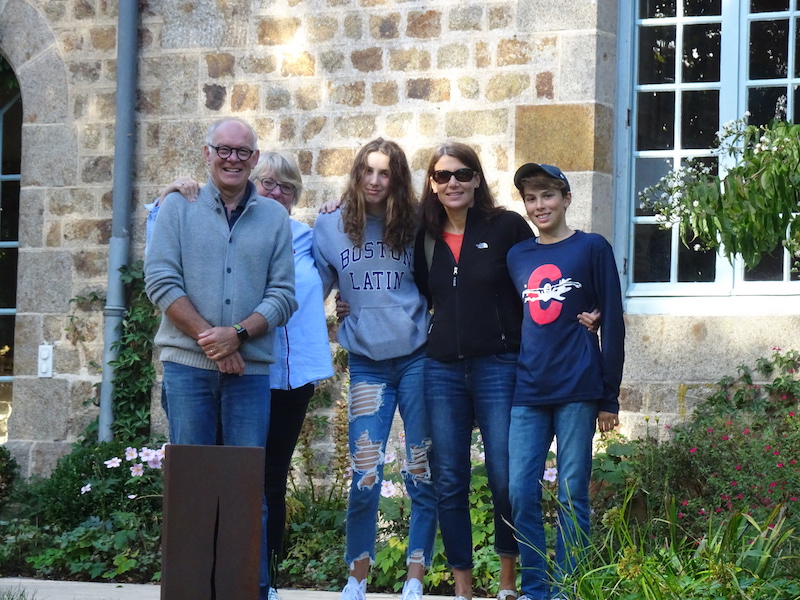 After visiting Mont Saint Michel, we were invited to stay at the home of Alain and Christine from the catamaran we had met in Borkum. They lived only about 20 minutes from Mont Saint Michel in a 13th century French country manor that they had extensively renovated. Upon arrival, we discovered a pond, swimming pool, gardens of exotic plants, guest house and garage in addition to the main house.

Alain, being a weathered veteran of crossing the Bay of Biscay, provided valuable advice to us on when we should set sail for the crossing. We all studied the weather reports and agreed that we should do some more sightseeing. Hurricane Lorenzo had an unprecedented northerly position and was a little too close for crossing the bay.

Alain and Christine made us a four course French meal, which they served with effortless ease, that we are still talking about. Champagne, foie gras, beef, cheese, dessert – were a perfectly delicious meal.

The home was seriously a museum. It was from the 13th century, thought to originally be a post exchange in prior centuries. They mentioned that the house was occupied by the Germans during WWII and that they had some posters or something from the Germans in the garage somewhere . . . “Historical” just has such a different dimension here.

After coffee, croissants and yogurt, we went on from Alain and Christine’s to tour Saint Malo and Dinan on our way back to Roscoff.  Saint Malo was an impressive, bustling, ancient walled city by the sea. We walked around the historic city filled with modern shopping and went out to the shore where you could see the wall that protected it for centuries. We found a little creperie for lunch, and discussed going on an all crepe regime until we left France. #allcrepesallthetime

Dinan was also a historic, walled, step back into time. We got a little sense of the history from a quick visit to Tour de l’Horloge, or clock tower, in the center of town. Most of it was not in English but it gave us vision of River Rance trading village in medieval times. We also visited the Eglise Saint Malo de Dinan with its impressive stained glass windows.  After inquiring with several restaurants, we ended up of course finding a creperie in the old town for dinner.

We arrived back to Verbena in the marina in Roscoff after dark where strong winds continued to blow.